This tape features a world-class mixed bout between a sexy young brunette woman and a chauvinistic male opponent. The male Arunas is a martial arts expert, and thinks he will have an easy time with cute little newcomer Victoria. He bites off more than he can chew when he proclaims to Victoria, "All women are bitches." She's pissed off and ready to show him a thing or two on the mat.

As you will see, Victoria's a real firecracker on the mat. She's quick, nimble, strong, and pissed off - a lethal combination if ever there was one! Throughout the video, she applies one devastating hold after another, ignoring Arunas' pleas for leniency. The few times he manages to break free and get back to his feet she immediately throws him back to the ground like a rag doll.

This is an extremely quick-paced and action-packed fight from start to finish, with Victoria proving more than her worth in battle. If you fancy high-energy mixed fighting, this video will not disappoint. It's a wonderful tape that is 100% competitive and genuine.

Victoria flies at her hated foe and barrages him with slaps and punches before literally throwing him forcefully down to the mat and kicking his ass. With arm bars, scissors, and every technique she knows, the young tigress fights and dominates the poor hapless male and makes him pay for insulting her. At points it looks as if she'll actually rip his arms out of their sockets with her expertly applied arm bars! 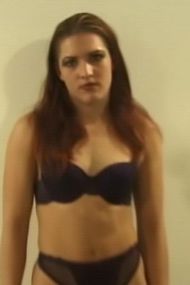