We urged all fans of Shelly to be patient and they would be rewarded. And rewarded they are as the awesome blonde (5'9", 145lbs) takes poor Jeff apart and teaches him a lesson he will never forget. Jeff's wife discovers he has been having an affair and hires a group devoted to punishing rapists, muggers, and cheaters and other indecent males. They send in their top operative, Shelly, to pay Jeff a visit and is he ever sorry.

Her massive breasts, powerful legs and strong upper body all serve to squash the wimpering male. Lingering holds entrap him as he begs for mercy, but gets none. She is bigger, stronger, and just too much for the wimp to handle. She really enjoys her work as she smothers him with her breasts, administers devastating headscissors and then pulls his head into her crotch to finish him off.

The buxom and hugely endowed lady proceeds to destroy the small and wimpy Jeff, both verbally and physically. Placing her high heels on his private parts and degrding hm with her rapier-like tounge is just the beginning of this frightening ecncounter for the codky little male. Shelly shows she really knows how to wrestle and fight as she uses all of the holds in the book and some that aren't.

Shelly covers him with her shapely ass and he disappears. Satisfied with a job well done, Shelly leaves, but you can bet we will see her again soon in another job for the organization. Using their large breasts as weapons also seems to work and there is also plenty of good facesitting in this fine catfight. You're going to love the sexy Shelley, and we're happy to inform you that she'll be appearing in many of our future videos. 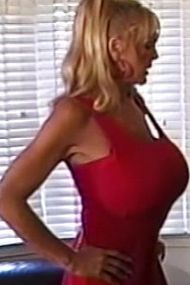 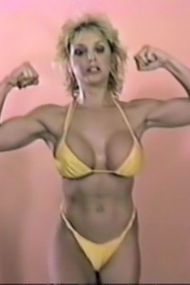