Scarlet is stunning, and has tits, ass, and a body to die for. Rock is a gorgeous hunk who in a fair fight is too much for Scarlet to handle. But Scarlet realizes quickly that she'd better use her assest and overpower him sexually if not with her muscles. 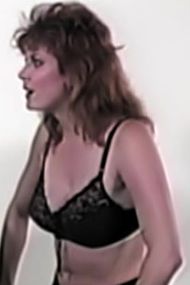 The sexy lady has had enough of Rock's mach act and grabs his balls and dick, and now she has the upper hand (literally) and pins him wigh her pussy, tit smothers him, and tortures him in a sensual manner, as she uses every inch of her fabulous body to prove her point.

Not content to concede defeat, the young Adonis grabs Scarlet's tits, overpowers her for a while, and even attempts to tsit on her face. Once last gasp, one last private part grabbing and squeezing and it's once again Scarlet's ball game.