No more "moments" for Jim. He is laid out spread eagle. Sally knows what winners do at Joan Wise. She uses his face as a stool. See Jim get acquainted with her hamstring muscles as his face becomes so contorted even his mother would not recognize him. This lady loves her work and you will love watching her. Fans of dominant, strong ladies will go wild over this video. It's the awesome Sally Mc Neil at her best. World-class body builder and strong woman, Sally Mc Neil 5' 3", 160 lbs., visits the Joan Wise Club for a workout. Jim makes a disparaging remark about body-builders. There are more brains in his dumbbells than between his ears and Sally vows to kick his ass. Jim has his minutes but they are few, far apart and fleeting. Mc Neil is awesome. When she clamps on a headlock, Jim is hard to find inside those python-like arms. She puts Jim into a figure four lock, an arm stretch, and bear hugs. Sally is unmerciful and has Jim over her shoulders in a fireman's carry. Sally does a snatch and lift, and Jim flies over her head. No, he does not have wings so watch him go "boom" on the hard mat. She tortures him and makes a him give up time and time again to her head scissors. 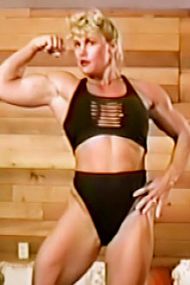