Moaning wildly as their bucking hips slam together, the succulent breasts of the girl on top dangling sexily in the face of the girl pinned beneath her. There are numerous wrestling holds used in the sexiest ways possible, from figure fours and scissors around the neck, to head locks and choke holds. Faces are pushed forcibly into waiting crotches, fingers explore ever-wetter crevices, eyes roll back in the head, and the moans of pleasure and desire increase to fill the room with the sounds of passion. Last but not least, the action culminates in explosive orgasms for both of the sexy girls. Fantastic facesitting and 69ing scenes highlighted by loud cries of achieved ecstasy rock the last part of this tape, and will certainly leave you wanting more. The erotic fight on this tape starts with a bang and doesn't let up until both combatants achieve their ultimate goal - orgasmic release. Starting completely nude the two girls are rolling on the mat in an instant, rubbing, grinding, groping, facesitting, and cumming non-stop, from beginning to end. The girls pant loudly as they furiously grind at each other trying to get off. Each in turn holds the other down, bawdily kissing and massaging the other's body. Breasts and cunnies are manhandled making the girls wet and wild with desire. With arms locked around each other's necks the girls relentlessly hump, grind and writhe, driving them closer to the ultimate in eroticism. 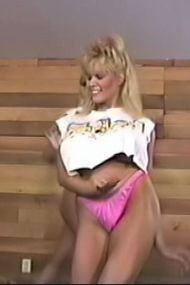