Die Australierin Lisa Marie ist Dynamit in grosser, sexy, aggressiver und gemeiner Verpackung. The newcomer proves she can hold her own with any Fighting Femme when it comes to taking apart a male, as she gleefully destroys Wally. She punishes and hurts him, time after time, as she uses her super-strong, long legs to entrap assholish Wally.

Now nude, the rampage continues, as the gorgeous Australian yanks the jerk's head into her waiting crotch, and applies reverse, figure 4, and standing headscissors which almost kills him, as she nearly makes good on her promise to "pop his head right off". Lisa Marie's verbal domination is a treat, as she makes Wally tell her how much he likes being tortured, as she relentlessly continues pounding on him.

After applying a bow and arrow, which almost splits his body in half, she renders him unconcscious with a final, brutal headscissors, kicks hime, steps on him, and then makes good on her promise to show him how well she can face-sit, as she puts her panties back on, and rides him until she is satisfied, as she pumps, grinds, and totally takes his identity away in a terrific face-sitting sequence. A super video, and you'll want lots more of exciting Lisa Marie.

Lisa Marie proves to be a skilled wrestler as she applies grapevines, bodyscissors, headlocks, full-nelsons, cradles, step-over toeholds, and more as she makes Wally submit many times. 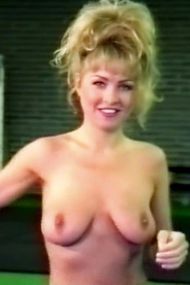