The 21-year-old, full-breasted, and mean newcomer Lena battles pretty, redhead Juliawho's quite the hottie, has battled for us before and has some experience on her side. If ever you saw two girls that were prepared to break the rules, it is these two. The fight that ensues is rough and tumble, and one not to be missed, as each girl gives as good as she takes in this spirited conflict.

There's an arm bar where you're sure the girl on the bottom was going to break her arm, followed by a knee pressed to the throat that would seem to end it all for good, but the battle rages. These girls are tough, and neither wants to give up. When the end finally comes, it is decisive and painful.

There is no question as to who the better woman is as the victor stands triumphantly over her defeated foe who sits licking her wounds in great pain. This is a great match-up, and a super exciting fight right to the bitter end. You won't want to miss this one!

Lacking Julia's experience, and with a mean streak a mile wide, Lena fights dirty and with a minimum of concern for her opponent's safety. There are numerous wrestling holds used to devastating effect including arm bars, leg locks, bodyscissors, schoolboy pins, and a variety of painful chokeholds. 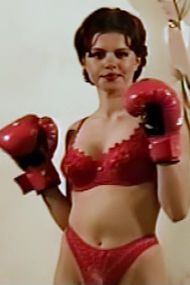 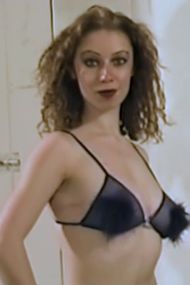