No rules. Anything goes. That's what these ladies want. That's what you get. Kitten 5'8" 135lbs. is a knockout blonde with a pair of legs that never quit. Margo 5'6" 128lbs. is no slouch in the looks department. She calls her adversary "cream puff" just to egg her on.


The ploy works. Kitten tries much harder. The action is fast-paced and spirited. There are scissors, tit grabbing, slapping, leg splits, wegies, breast to breast action and hair pulling in this lively, all-out encounter. Neither Kitten or Margo are experienced wrestlers, but what they lack in technique they more than make up for in determination. the cat in each woman is much in evidence. Neither fighter passes up a spanking, a tit-grab or a less fattering Kodak moment for her adversary. The girls pull off a double wedgie. They get tangled up in a double pretzel. Kitten's light blonde hair is constantly flying. Margo's brow is constantly furrowed with concentration. When Kitten gets Margo into a head scissors and squeezes till Margo almost blacks out, the conclusion is dictated. Kitten gives Margo a wedgie and slaps her pussy while sitting on her face.


"You know what this is all about." If Margo doesn't, she learns. Kitten loves to face-sit. You can se her flirting with orgasm. She rides frontwards, backwards, and makes Margo open her legs. As the video ends, Kitten sits against a wall and fingers herself. Wrestling gets her off. Order this tape and see what she can do for you. 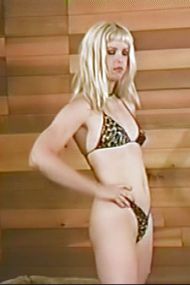 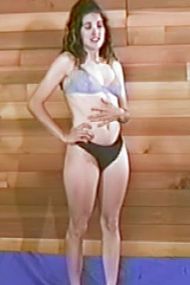