Wicked is the word for powerfully built, young Janis, who has the strength and attitude necessary to make handsome stud Damien pay for calling her a "fat ass bitch". Janis promises to rip cocky Damien's hair out of his head, and shove it where the sun don't shine, pull his dick off, and shove it down his throat, as she angrily proclaims, "that little faggy ass bitch deserves it". Damien once again proves that he is no pushover, but the power of the turn-on Janis wears him down, as she applies full-nelsons, bodyscissors, schoolboy pins, an inescapable torturous headscissors, and a sleeper hold which renders him helpless, and by now both battlers are nude, and does Janis ever work on torturing Damien's cock and balls in a brutal display of meanness. Damien pleads, but its to no avail, as his conqueror puts on an unbelievable display of nude face-sitting, as she pumps, rides, and grinds all over his face, all the while working his private parts over. The formerly arrogant, but now humbled hunk is in deep trouble as the powerful lady puts her full weight on him and stomps and tramples him to her hearts content. Another dynamite mixed video.
Janis 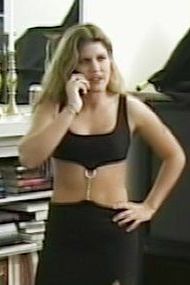