6"3", 190 lbs., with enormous boob, and a bundle of pure dynamite is Amazon Bunny, who is not only gorgeous, and built like a brick shithouse, but can fight, and punish a man half to death.

Let´s see what you have - is moron Wally´s challenge, and does he ever finds out. Having had his ass kicked by Bunny before, should have taught the little chump to stay away, but brains are not his strong suit. 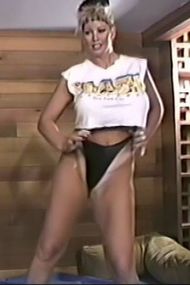 Powerful, devastating scissors torture the hapless male and he is in a struggle to just survive the one-sided, brutal battle. Not through by a long shot, arm-bars, toe holds, standing on, walking on, hammer locks, surfboards and lots more as Bunny pounds her victim into the mat.

The more the beaten and battered male submits, and begs for release, the more determined the giantess becomes, as she viciously yanks his head into her crotch and squeezes him half to death. And now the coup, as she places her enormous, shapely ass squarely on his face and rubs, grins, and pumps her foe into oblivion.